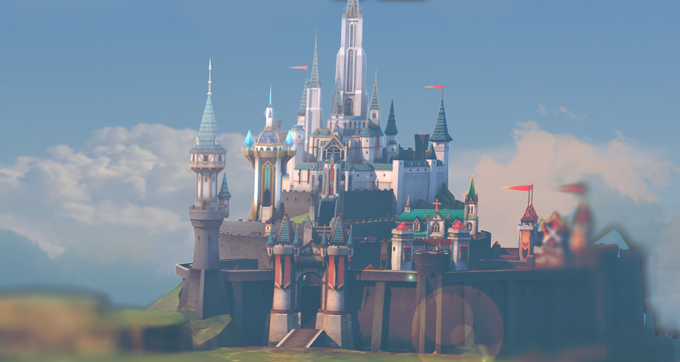 Vollandia, also known as The Land of Plenty and The Blessed Land, has been torn part by war for centuries. Legend says that one person once managed to unite the entire land, and became a holy ruler. All the rulers of the Clans across the land dream of becoming the next holy ruler. The wary humans, the magic-obsessed elves, the business-oriented dwarves... Every Clan has its own agenda. As the leader of a City, will you be able to summon the right people, and select the best strategies to build up a powerful presence in this land and become the next ruler...?

In ancient times, the various Clans fought among themselves over the land’s resources, and the conflict resulted in so much death that it attracted the attention of demons.

The demons used undead magic to cause even more death and chaos...

And the Dragons fought the demons in an attempt to safeguard life on Vollandia.

All the Clans begged the Dragons to protect them, and the Dragons passed on their magic and knowledge to the people so that they could use it against the demons. Civilization flourished, and the Clans interacted with one another, creating a common language...

Finally, the demons were forced to leave Vollandia, and the land was at peace.

Then one day, the Dragons suddenly vanished...

The elves, humans, beastkin and dwarves left the Dragon’s land to establish their own countries.

The Clans gradually changed over the next several centuries, developed their own goals and ambitions, and started warring among themselves again...

Major events in history after civilization had flourished: Edit

The elves’ keen sense of magic led them to an enormous crystal that contained a seemingly endless supply of pure magical energy. They even found out that the light it gave off enhanced their control of high level magic. They called this miraculous find the Eternal Crystal.

A great elven wizard tried to make use of the power of the Eternal Crystal to conduct magic experiments, and the crystal became unstable. Despite engaging the help of the elven council, they couldn’t stop the crystal from exploding...

Waves of magical energy swept across the land, and fragments of crystal flew in all directions, creating some serious consequences.

The resulting inter-realm tears let in otherworldly creatures, and the magic of the crystal shards soaked into the earth, creating an unnatural magical area called Bloodsoil.

The elves started fighting one another over this incident, and split into two Clans: Sunsingers and Moonseekers.

After the elves split into two Clans, a Moonseeker scholar was convinced that elven knowledge alone was not enough to produce a firm control over magic, and thought of the dwarves, who had invented [Runes]. He wondered if the dwarves could invent something that could reliable control magic.

Some dwarven tech researchers were already interested in the idea of researching magical energy, but the dwarves do not know how to use magic, and hence the dwarves split into two groups. The more open-minded ones think that this is a great chance to develop technology even further, and the more conservative ones feel that magic had torn the elves apart and that the dwarves should not make the same mistake.

At first, the matter was only a subject of debate, but the conservative dwarves consisted mostly of powerful aristocrats, and the debates grew more and more heated. Eventually, about one third of the dwarves left the Flamehammer kingdom.

The dwarves who left needed money for tech development, and so they set up a large merchant organisation called the Steambeards. Hence, two dwarven Clans came into being.

After the elven civil war, a king managed to set up a grand and powerful city in the center of the land. He hoped to be able to establish a stabilizing influence upon Vollandia, and promote peace and development, like the Dragon did, but it didn’t turn out that way.

War and conflict destroyed the city, but the ancient Capital’s magic still exists...

Retrieved from "https://mobileroyale.fandom.com/wiki/Vollandia?oldid=2938"
Community content is available under CC-BY-SA unless otherwise noted.