“Once upon a time, the elves controlled a vast empire that spanned the continent. The elves lived in luxury, drawing all their energy from the Eternal Crystal, a boundless well of power. But an unfortunate accident shattered the Eternal Crystal, resulting in a bitter civil war. The elves splintered into two tribes, the Sunsinger warriors and the Moonseeker mages. The Sunsingers trained Blademasters to counter the powerful mages. Elves like Valenia, who were very sensitive to magic, were recruited from young and schooled in anti-magic arts. After a lifetime of indoctrination, Valenia firmly believed that all mages were evil, and had to be put down like the dangerous animals they were.” 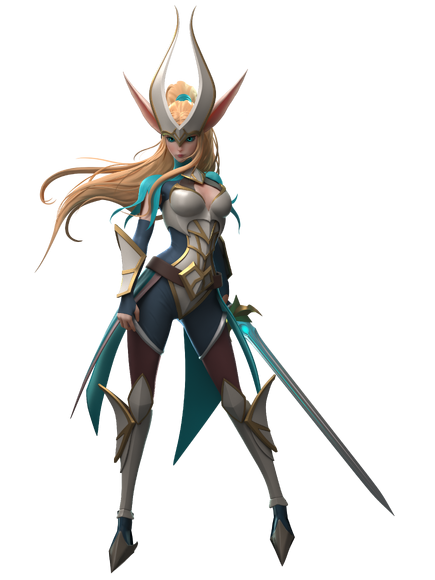 "The Solar Guards are the peacekeeping force of the Sunsingers. The Blademasters dealt with magic as it appeared, but the Solar Guards work to make sure that no mage could ever become a problem. As a Solar Guard, Valenia hones her skills not to conquer nor provoke; hers is a higher purpose: to prevent reckless arcane obsessions that threaten the world's very existence. With powerful anti-magic runes imbued in her armor, Valenia is well-equipped to bring down even the most powerful mages."

Retrieved from "https://mobileroyale.fandom.com/wiki/Valenia?oldid=4293"
Community content is available under CC-BY-SA unless otherwise noted.