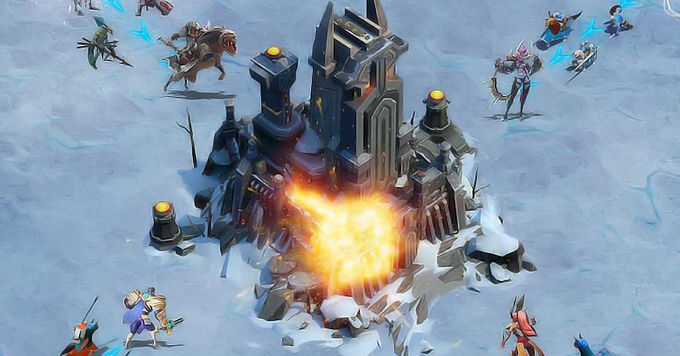 Once the Fort Wars begin, players can attack Forts or form alliance armies to target them, and the goal is to conquer these Forts. Earn Points by occupying Forts, and the first Guild to reach 60 points will possess the Fort.

Guilds are the participants in the Fort Wars, and there is no need to register for it. Players who don't belong to any Guilds will not be able to attack, scout or form alliances against the Forts. When the Fort Wars begin, a number of random Forts will be available for players to attack. Each Fort offers a different buff to the Guild that manages to possess it.

Can I quit my Guild during Fort Wars?Edit

You may freely switch Guilds during the Fort Wars. If a player quits a Guild that is occupying a Fort, all the troops inside the Fort will be forced to disband and return to their Cities.

Once a Fort is occupied, not only do the Guild members benefit from the Fort's buff, the occupying Guild also gets all rights to the Fort, and the Guild tag will be displayed next to the Fort's name on the map.

How often are the Fort Wars held?Edit

The next Fort Wars will be held 120 hours from the time the last Fort enters protection state.

Before the Fort Wars begin, the fort is in protection state, and it offers a buff to the occupying guild, and cannot be attacked, scouted, or target by alliance. After the Fort Wars begin, the Fort enters in war state, offers a buff to the current occupying guild, and any guild may be attack, scout or form an alliance against it. When the Fort War begins, the previous owner will be removed from the Fort, and the Forts will not belong to anyone.

1. The system will open up 8 Forts

2. Guilds can own multiple Forts at the same time

3. Players may switch their defense army formations within the Fort

How to accumulate points during the Fort WarsEdit

1. Attack or form an alliance against a Fort, and win the battle

2. The winner occupies the Fort, and points are calculated based on the duration of occupation in minutes. Time less than one minute will not be counted.

No matter which phase it is, once a Guild accumulates 60 points, it will become the owner of the fort.

How to check Fort PointsEdit

Based on the individual player's time spent in the Fort Wars, points will be allocated according to the grades and numbers of enemy troops killed/lost. The player will win a reward once enough points have been earned. The system will also take into account the troops lost during that session of the Fort Wars, and rank participating players, the distribute Gold from the reward pool to the players according to their rank.

The points will be calculated from the start of the Fort Wars, and cleared once it ends. They will not be retained for the next season. Players will not loose points if they leave their guild or switch guilds during the season. If a player switched Kingdom during Fort Wars, the player's points and reward grade will be completely cleared and reset.

The Guild that has control over the Capital when fort wars is finished can attribute titles to benefit it's members and to impair it's enemies. See more about titles here.

Retrieved from "https://mobileroyale.fandom.com/wiki/Fort_Wars?oldid=4283"
Community content is available under CC-BY-SA unless otherwise noted.